An artist becomes a storyteller with brushes and strokes of color and vibrance.
Ricky's art mirror the emotions of our lives and bring to light stories of the past and present.

His art tells the stories of poverty, race, segregation, and life's challenges. He also creates works to enhance one's understanding of the joy of childhood, the beauty of mankind, and the love of family ties. Each piece magically touches you in a way that tugs at your heart strings and helps you to understand our history.

Ricky Steele's art is one man's creative look at humanity...

The start of his creative spark 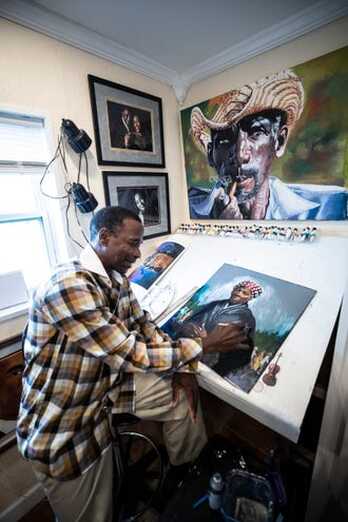 Artist Ricky Steele
Panama City is home, Steele said. While he has visited and briefly lived in other cities around the country, Panama City is home.  The 62-year-old was born in Panama City to a big family, with multiple siblings and his father as one of the first Black police officer in the city. He said his family is a source of inspiration and joy for him.
​
As for his love of art, he remembers from an early age never being able to sit still and wanting to always create.  “I was like this weird kid that wanted to draw instead of doing what everybody else was doing,” Steele said.  "Everybody else would be like, ‘Hey, we outside playing, what a nerd.' So, I was the nerd.”  Steele also credits early influences and mentors, like teacher James Chichester and friend David, for pushing him to be a better artist. Their encouragement and tough words brought me to where he is today.

Breaking Barrier: The First Black Airbrush Artist in PC Beach, FL
Steele went to Tom P. Haney Technical Center, choosing a program that strictly focused on art since he couldn’t afford to take extra classes for math or English.
One of his classmates, Tim Thomas, worked with airbrushing and Steele said he was interested in pursuing the craft.  However, Thomas warned him of the challenges and discrimination he would face.
“He shared everything, I was going through and everything he said happened,” Steele said. “I went in places, had the portfolio, the certificate that I was a licensed commercial artist, but they said, ‘well, we're not hiring right now.’ Big sign out there, ‘Airbrush Artist needed.’”  Turned away from 40 different stores across the beach. He said he felt depressed and began walking home. Then he met a gas station worker named Sparky. While getting gas, he saw Sparky airbrushing, to which Sparky asked if he needed anything. He said he simply replied “Nothing, just a job.”
“This guy got me to come behind the counter and he said, ‘why don't you do that design right there,’” Steele recalled. “I said okay and I did it. And I put my own little twist to it. And people were walking in and they were like, ‘Hmm, I want that.’”  As he was leaving, Sparky informed him he had a job and he needed to be there tomorrow by 8 a.m. Steele immediately jumpstarted his art career, becoming a local celebrity around the area as the only black airbrush artist, he said.  As he became more well known, he would move locations throughout the beach and meet all sorts of people, even once airbrushing the motorcycles of the Hell’s Angels when they showed up at his house, leading to a spontaneous cookout with the group. “That became my trademark and people started looking for me,” Steele said. “People would come down-home and go all over the beach till they find wherever I was. And so, what in the beginning was a hindrance became a blessing.”

The Transition: Becoming an Emotional Painter
He said the reason he is referred to as an emotional painter is because of the emotions he is able to draw from his work. When Steele began the leap from airbrush artist to painter, he said his friend encouraged him to start getting serious about selling his originals. He made $5,000 dollars his first day. “I said, ‘I'm convinced, man,’” Steele said. “And that started me to put more to my work and realizing that I was worth something. They made me understand my worth.” He started painting while doing his airbrushing, eventually working on over 30 canvases to start a gallery. Black historical figures and eras became the subject of his artwork, he said.
“Drawing inspiration and strength from people that defied the odds, and people that went against color barrier,” Steele said. “I feel as though, if I could leave something for people to say, well, why were they important? What made them special? I can share their story.”

My History: Steele's Legacy
Steele has become a notable figure within not just the arts community, but the culture of Bay County.  Steele has a painted portrait of late civil rights leader, former U.S. Rep. John Lewis, hanging in the Panama City Hall. Steele also attends local art shows, gives back to the community, and has coached local basketball teams for 17 years.